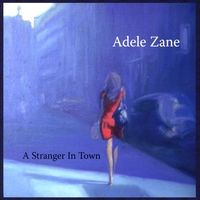 Present day jazz singers are in an enviable position.  They have the superbly crafted songs of what has come to be called The Great American Songbook –- the time-honored classics from the past century that make up the meat of the jazz vocal repertoire -- to draw upon.  In addition, they now have decades of popular songs from the rock era onward to work with.  Yet few gifted vocalists allow themselves the freedom to interpret worthy material that may have originated from the writing team of, say, Jagger and Richards rather than Rodgers and Hart.

Thankfully, Adele Zane is among the farsighted vocal artists who proudly revel in diversity.  On her third album, A Stranger In Town, Zane has indeed found room for songbook classics as well as classic rock reworkings; pop songs both vintage and contemporary, and even a smartly shaped original tune that fits snugly into the mix.  Working hand-in-glove with guitarist and arranger Andrew Green and a team of sympathetic musical collaborators, Zane uses her honed talents as a skillful interpreter to add expressive and unexpected dimensions to music she loves.  “I listen to everything, from Indian and Middle Eastern music to pop, country and rock,” says Zane.  “Older songs are great and I love to sing them, but I also want to investigate what I consider the “new standards” that have surfaced in the past fifty years.”

A Stranger In Town announces its intentions from the start with Zane’s lovely take on a truly unexpected song, “That’s The Way” -- a gentle highlight from the third Led Zeppelin album, -- which comes complete with an imaginative Eastern-flavored arrangement spiced by Green’s evocative guitar work and Todd Isler’s exotic percussion accents.  And the eclectic fun is just beginning.  Grand monuments of song are well represented: “It Never Entered My Mind” and “Where Or When,” courtesy of Rodgers and Hart; the classic broken-hearted lullabies, “In the Wee Small Hours of the Morning” and “Darn That Dream”; and Mel Torme’s “A Stranger In Town.”  But even the sturdiest standards are given fresh interpretations that make the most of Zane’s vocal inventiveness and Green’s far-reaching guitar styling, as in their intimate voice and guitar duets on  “It Never Entered My Mind,” “Where or When,” and  “In the Wee Small Hours.”  The singer’s confident subtlety, blending with the guitarist’s use of sensitively atmospheric textures, breathes new life into familiar songs.

Just as welcome, if more unlikely, are highly personal adaptations of the Rolling Stones ballad, “Ruby Tuesday”; “In the Darkest Place,” a highlight of the 1998 collaboration between Burt Bacharach and Elvis Costello; and “Because of Toledo,” a searing song from the Scottish band, The Blue Nile, as well as an added wild card, the 1956 pop hit, “Two Different Worlds.”  Zane also contributes her own “Girl At the Bar,” a tale of cheerful dissipation.

Born in Brazil and raised in San Francisco, Zane attended San Francisco State University’s Voice Performance program.  A popular Bay Area vocalist, she performed at such lauded nightspots as Fanny’s, The Plush Room, and Trinity Place.  Relocating to New York in the early 90’s, Zane studied with the legendary singer Jackie Paris and others, while also appearing at Danny's Skylight Room, CBGB's and The Bitter End. She has since added Birdland, the Iridium and the Cutting Room to her performance CV.  Zane’s debut CD, Each Time featuring two original compositions co-written with pianist and composer Frank Ponzio was released in 2000.  So Blue, her second CD, was released in 2005.

Zane continues her quest to celebrate the noteworthy songs of both bygone and recent eras.  That is, as long as they harbor an innate resonance for her. “A song –- no matter what it is –- has to speak to me.  I won’t sing it unless I feel an emotional connection to it.”